This time Meg will address an issue that has long been a nemesis for circular knitters - the ‘jog’ in stripes or patterns that occurs because of the spiraling nature of knitting in the round. Read on and find a video of Meg's demonstration below.

Circular knitting is like a barber pole - the end of each round is slightly higher than the beginning, as the work spirals upwards. Naturally, a stripe of color accentuates this property (with the end not meeting the beginning, resulting in a ‘jog’).

Over four decades ago, while designing a Swedish Dubbelmössa hat, Meg offered one of the first methods to combat this effect. Her clear and concise explanation may be viewed on the Knitting Glossary DVD, also available as streaming video. Her Dubbelmössa pattern can be found in Handknitting with Meg Swansen.

(Image on left shows the jog, Image on right avoids the jog.)

Meg's method to avoid the jog (in a nutshell):

On a single round of color (say, when alternating single rounds of 2 colors) - when you finish one round and are starting the next round in the 2nd color, make sure to bring the new color strand over the old color (instead of under it) when knitting the first stitch.

If you do nothing to obviate the ‘jog’ when knitting in a fine gauge (say 7, 8 or more sts/inch), it is often barely noticeable (for example in Fair Isles), and - on a pullover - the color change is relegated to a side ’seam’.

One easily applied remedy to the jog in a Fair Isle type of situation is: When you are through with a color, break the wool - even though you may want that color again in a few rounds. Those ends are very useful to hide the jog: darn in the final end down and to the left. Darn in the beginning end up and to the right.

But what if you are knitting a color pattern, like hearts or leaves? If you do nothing, your first stitch will travel through the motif, and one side will be higher than the other.

In order to avoid the jog within the motif, you need to work to the right or left of each motif (placing the first stitch of the round in the space between motifs). In this video, Meg shows how it is done:

You can apply this technique to any circular color-pattern knitting. For instance, in our new Shepherd’s Pi Shawl (SPP#74), when beginning any of the motifs, move your starting stitch to the left or the right (as Meg shows in the video), and the ‘jog’ will not be visible. For the solid stripes, utilize the adjustments described above.

Employing these methods in various circumstances, and eliminating all jogs from your circular knitting, adds a sophisticated air of mystery to your projects, and a bit of self-satisfaction regarding your skill level.

To that end, we offer you a free pattern to help you practice and to thank you for supporting Schoolhouse Press. 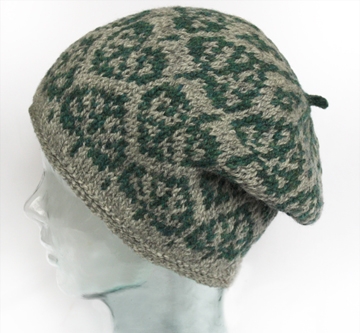 posted on Tuesday, November 21, 2017 6:29:15 PM America/Chicago
Dear Cynthia S, Thank you for your question...I see that I did not make this part totally clear: the decrease is worked only ONE time - to shift the beginning one stitch to the L. Continue to work with one less stitch until the motif goes vertical again...then increase the missing stitch. (OR, do nothing, and accept the additional 'separating stitch' between the first and last motif.) Sometimes it becomes clearer when you are actually knitting...

posted on Tuesday, November 21, 2017 8:23:07 AM America/Chicago
I have a question about knitting the two stitches together. What I don't understand is how I get that stitch (count) back in order to ensure that I have the correct number of stitches. I can see the k2tog but I am not clear about what happens at the end of the row, since if this practice continues throughout the hat the number of stitches would continue to dwindle, right? I know that I am missing something but can't figure it out. Thanks in advance.

posted on Saturday, November 18, 2017 4:41:56 PM America/Chicago
Thank you for an elegantly simple solution. You make it so clear in the video. And, thank you for the pattern as well! Off to the stash to give it a try.

posted on Friday, November 17, 2017 8:18:43 PM America/Chicago
Wonderful way to dance around the jog to make it blend in nicely. I get it because I swatched. Reading or listening doesn’t help me one bit....only hands on. Nice to see you, Meg. Happy Thanksgiving to you and all.

posted on Friday, November 17, 2017 12:10:56 PM America/Chicago
Thank you for the free pattern! It made my day. I love making hats for gifts for my family. I'm working on one now called Hermione loves Ron. (Harry Potter) ❤️

posted on Friday, November 17, 2017 12:00:58 PM America/Chicago
Laraine - are you viewing on a computer or device? If a device, you may want to change browsers. Check your browser settings for privacy regarding videos, etc. There aren't any privacy settings on it. Let me know how that works. You can email me at info@schoolhousepress.com

posted on Friday, November 17, 2017 11:20:04 AM America/Chicago
Oh, what a GIFT this blog post is! As a new color knitter who is particular, it is marvelous to have such a clear demonstration of what it takes to avoid a jog and keep the motifs marching around intact with evenness between them via judicious increases and decreases. I am thrilled for the hat pattern to try this out for myself, and this and all my future colorwork projects will be all the more beautiful for it!

posted on Friday, November 17, 2017 12:55:44 AM America/Chicago
I have been searching and asking for a solution to the jog problem when knitting stranded color work for no less than two years! This is a brilliant solution! I have long discovered my preferential technique for avoiding a jog when knitting stripes, but the aforementioned issue really stumped me. Thank you for the wonderful video and for the generosity in offering the free pattern! Happy Thanksgiving! Best regards...Mill
Set Ascending Direction