My mother, Elizabeth Zimmermann, had taught me to knit, holding the working wool over my left index finger (commonly called ‘continental’ knitting). When I became intrigued by color-patterns, mum showed me how to hold the second color in my right hand (‘American’, or ‘British’ style). 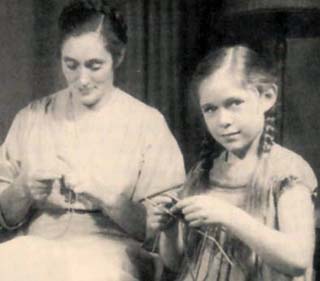 I always picked the shade that had the most stitches for my familiar and clever left hand, and the second color went to my awkward right hand. Gradually, my right hand began to figure it out, and I motored along happily in this mode for over a decade, producing a more or less matching gauge with each hand. I still recommend this method to new color-pattern-knitters: both colors are poised and ready to be knitted (no putting-down one color and picking-up the other), and you can keep one color on each side of you as you work, to prevent them from getting tangled.
During the long period when American knitting books were very sparse, my mother imported a number of titles from overseas. She came across some books during her travels abroad, and others were recommended by her customers (a mode I still depend upon... there are so many outstanding knitting books being published, I value the recommendations from our subscribers).
One day, my mother’s order for a Swedish book arrived: Binge - en halländsk sticktradition by Britta Johansson and Kersti Nilsson. 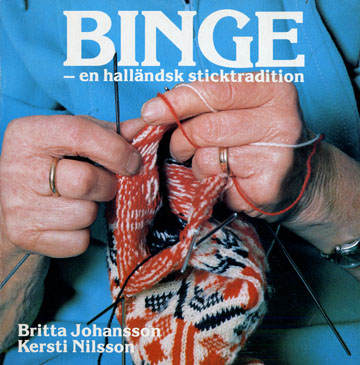 On the cover was a photograph of a woman knitting with both colors over her left forefinger. I immediately began to experiment. But even dedicated practice did not enable me to control the tension of the unworked color over a 3 or 5 stitch carry. I doggedly kept at it - and one day, while I was not paying particular attention, my left hand came up with a solution on it’s own: carry the second color over my left middle finger. Aha. It was kept out of the way until needed, and had its own tension control. Now - nearly 50 years later - I have heard of 3 or 4 other knitters who use this same style.
At present, I am engaged upon the task of reproducing a nearly 100-year old sweater, directly from Fair Isle, which had belonged to my grandfather. And, since I am often asked to describe my manner of two-color knitting, Cully took this video of me at work so you can see what I am talking about.

posted on Saturday, September 3, 2016 9:20:47 AM America/Chicago
That's how I knit! Sort of... instead of wrapping the yarn over the front of my fingers, I wrap it over the back. I carry the dominant color over my index finger and the other color over my middle finger. It's good to know that I'm not alone in my strange (to my knitting friends) way of two-color knitting. Thank you for the video!

posted on Friday, September 2, 2016 2:24:58 PM America/Chicago
Thank you for this video. I must say it was a bit fast for me, but fascinating to watch.

I am left handed, and learned the knit stitch many, many years ago from my aunt. I was more comfortable carrying the yarn in my left and knitting through the back loop, combined style. When I got to the end of the row, without any prompting or instruction from my aunt, I simply switched hands, and knit back backwards! This made her so confused, she said she wouldn't teach me anymore. Flash forward many years, I have small children and am staying home. A friend offers to teach me to knit. Well, she was surprised how I knit. Needless to say, she showed me her way, and I learned how to purl. I had to "read" my knitting because of the combined style.

A few years later, I decided to try to carry two colors in my left hand. It was a bit awkward at first, but I kept at it. Now, I have to try it out, to find the way the yarn wants to be held, lol.

Because of all these experiences, I am able to teach a variety of knitting styles! I brook no excuse! Lefty? So am I. ADHD? I taught a whole Girl Scout troop in one evening the basics! Think it's too hard? If you can tie your shoes, you can knit! No patience? You binge watch a whole season of a tv show for hours on end, you can spend some time learning to knit.

Keep giving us inspiration, we will keep knitting!

posted on Friday, September 2, 2016 11:28:23 AM America/Chicago
Thanks for this video! I love how you're speaking "kitty" as you go, and searching for the song of the round.

I must try your method. I still do Fair Isle with a yarn over each hand. This looks much faster.

posted on Friday, September 2, 2016 11:03:41 AM America/Chicago
Thanks for that video. I'm going to try it. I have often thought that one of the greatest things about knitting is when you realize that your hands have figured out a way to do something while your mind is elsewhere. I have never heard anyone else say that until you said it at Knit Camp 1 this year. So thanks for that too.

posted on Friday, September 2, 2016 9:50:24 AM America/Chicago
I knit American or throw..and hold both yarns in my right hand..I have been trying to first natured about 2 handed..and how found an awesome flick down..to pull in floats...I see you did not have any long floats..how do you manage them?

posted on Friday, September 2, 2016 9:02:21 AM America/Chicago
Loved the running commentary by your knitting assistant! And I am so chuffed by FI knitting right now, with Janine's book coming, and this excellent reminder of how you manage your yarns in 2-color knitting. Knit on, indeed, dear Meg!

posted on Friday, September 2, 2016 7:02:05 AM America/Chicago
I, too, had an incredibly trying day yesterday.Goodness. Now, happily ensconced in the beautiful mountains of far western Maryland, I check my email and lo and behold there's this beautiful gift from you, Meg! How completely wonderful! As a continental knitter, your technique looks like the perfect answer to tension issues when dividing yarn between hands - which for me often produces undesirable tension problems.
Everything in life has a rthym, doesn't it?! You and your lovely feline friend and your resplendent knitting have certainly found it!

posted on Thursday, September 1, 2016 2:57:53 PM America/Chicago
Add me to the list of folks who could watch you and listen to your beautifully voiced cat, all day.
Please, how do you tension the yarn? Do you hold it with your pinkie or just let it drop?
Oops, I think I just found the answer, looking at the book cover above.
Thanks so much, I'm just starting a pair of Fair Isle socks, maybe I can figure this out on them.

posted on Thursday, September 1, 2016 2:25:57 PM America/Chicago
WOW...I have never seen anyone else (aside from me and my Babcia (Polish Grandmother) knit 2-colors that way.) I tried your way but it was as awkward for me as the pictured way is for you (I'm guessing). Being Polish, my Babcia knitted "Continentally" and I didn't know there was any other way until its difference was pointed out in a class. Because I purled (alternatively, is what Lucy Neatby calls it, but was also taught to work that stitch properly on the next round so it doesn't twist) differently, I was unable to produce a brioche-like pattern. The woman teaching the class said, "Oh, you purl wrong." Anyway, a long story short, I learned about "combination" knitting, and still purl "wrong". I find when I purl "correctly" my tension is very uneven or I "row out" as they say. So I figure why try to fix something that isn't broken.

I wonder...the History of Poland and Sweeden are very intertwined. I wonder if that's where/how Babcia learned it from her mother, etc.

posted on Thursday, September 1, 2016 1:53:46 PM America/Chicago
I could watch you knit all day. I've had many hours of solace watching you & your Mam knit on dvd over the years. While I love to knit fair isle, I don't think I'll ever be as quick & assured as you! Keep on inspiring us folk to take up the needles and knit on! X
Set Ascending Direction