During recent decades, the proliferation of knitting-gatherings has become quite staggering. Plus the ease of hopping to Europe to attend a knitting event or tour is suddenly not unlike taking a bus to Duluth!
One would think that social media has connected knitters to each other world-wide (as, indeed, it HAS), and we would be sated by that. But there remains a strong appetite for us to meet each other in person; needle-to-needle, as it were.
I am glad the electronic connection - as extraordinarily wonderful as it is - has not dissolved the hunger we have to talk back and forth, exchange techniques and tricks, and especially to see, feel, and admire each other’s work. 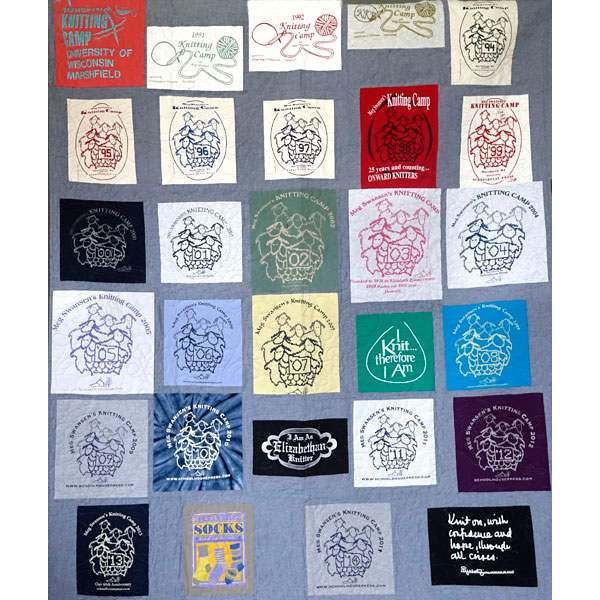 Our Knitting Camp was, in 1974, the first of its kind in the country, and July 2016 will see the 43rd year of our gatherings. The Schoolhouse Press staff (Cully, Eleanor, Michelle, and Tami) works on the camp events through the year, and Amy Detjen and Heather Black assist me during each camp, and work individually with knitters in the evenings.

We hold 4 consecutive sessions each summer, and they are divided into two categories;
- There are two Knitting Camps for those who may be attending for their first or second time, and for whom we offer plenty of detailed knitting instruction.
- And there are Knitting Retreats for knitters who have been coming to Camp for many years - and even decades (designer, Lois Young has never missed a year). The Retreats are true reunions, yet, like regular families, we are welcoming to new knitters who join our group.

Our camp application process for 2016 begins on Monday, February 1 and runs through February 8. Visit our Knitting Camp page to apply.

Our sessions of Knitting Camp plus our annual fall workshop encompass nearly all of my teaching activities these days; however, I have over the years spoken and taught at many different knitting events throughout the U.S. and abroad (In 2016, you'll find me speaking to the Madison, WI Knitting Guild and addressing knitters through the keynote speech at The Yarnover, in MN). A few years ago, I was quite startled to be invited to teach a knitting weekend for a shop in Italy, The Wool Box in Biella, to which I replied: yes, thankyouverymuch.
The knitting gods were with me and I serendipitiously ‘found’ Donna Galleta; an interperter by trade and an excellent knitter; an unusual but necessary combination. Because of Donna, the workshop went as smoothly as it did, and the participants seemed to enjoy themselves as much as I did. 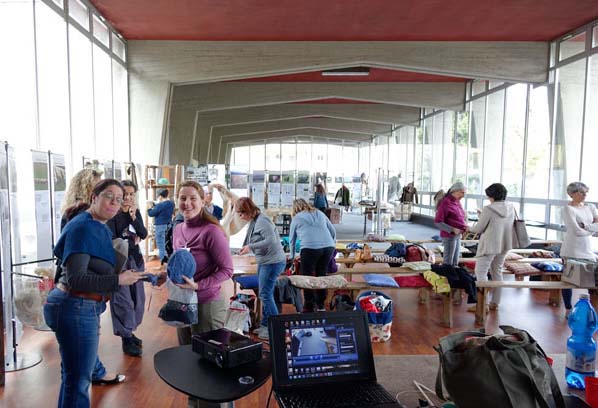 Since The Wool Box was in the very northern part of Italy, Lloie (my sister) and I allowed a few extra days to instigate a search for Black Nose Sheep which are specific to the canton of Valais, Switzerland. Lloie threw a dart at her iPad, into the heart of the Valais district, and booked us a room in the tiny town of Zeneggen, not knowing that it was On Top of the World. After many miles of hair-raising 180-degree switchback curves on a Very steep and Very narow road up the side of an Alp! we found the lovely little village. 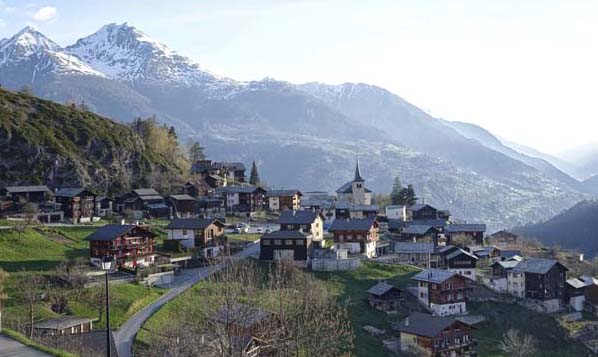 From our balcony we had a breathtaking view of the small mountain community; typical Swiss Alpine chalets, old stonework, slate rooftops, flowering trees, and snow capped mountains in every direction. I could not stop taking photos. We had fallen, Alice-like, into a photograph from one of the Swiss calendars of our youth.
We asked our hotelier (Herr Zimmermann !) about the famous sheep from his district, but received a blank stare. So we took an exploratory drive - past sheets of purple and white Hepatica strewn through the woods - and spotted a flock of sheep and their salty looking owner. We drove down the moutainside to the farm and (in German) admired his sheep and told him we were on a quest for Schwarzenase schafe; he said he has only weissenase schafe! (big laugh all around) and he did not know of anyone in the area raising the breed we sought.
We returned to the hotel and spent, literally, hours on TheGoogles searching for black-nose sheep in Valais. We entered every conceivable search word and phrase we could think of - but to no avail. Where were they hiding?
Since we were there off-season (April is the time between skiers and hikers), there was only one other guest in the dining room that evening. As we chatted with him, we mentioned our fruitless search for black-nose-sheep... and he said, casually, “Oh, there is a breeder right down the mountainside from here.” !
Back to our room to watch the snow capped mountain tips glow pink and red in the setting sun, and the rise of a gibbous moon. Little village lights glowed on the opposite side of the deep valley below us. 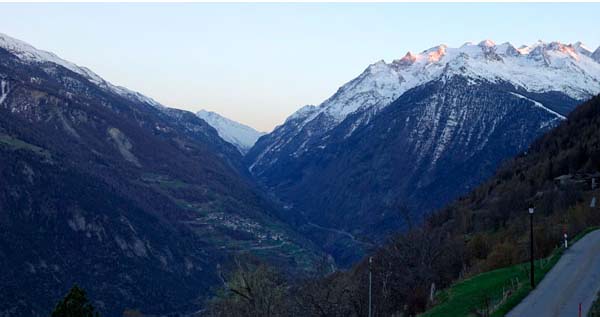 After a full breakfast, Danke and aufweidersehen to Herr Zimmermann, we began slowly down another steep switchback road to the valley below...keeping our eyes peeled for black-nose sheep. The road abruptly ended at a small farm, where we saw a guy. Lloie explained and asked for help in our sheep search.  “Oh yeah’, He says, “head back up the mountain and look for a brand new barn.” We did, and saw a new shed (not at all like a barn) and another guy outside on this beautiful spring morning. We asked him if he knew of a sheep farmer in the area who bred black-nose sheep. “Ja!” he said, “That is me!...C’mon down.” 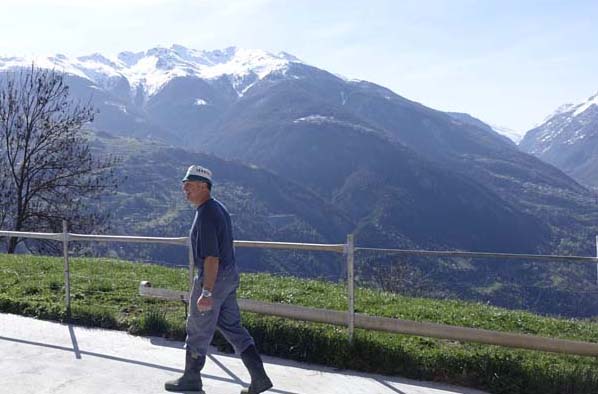 We parked on the road, walked down the steep driveway and followed him into his new building (“stall”). Llo told him I was a knitting teacher and wanted photos of his sheep for an article; he seemed very pleased by this.
He warned us that the sheep would be skittish in the presence of strangers; speak softly and move slowly. And there they were! About 45 Black-Nose sheep; 2 rams, and the rest ewes, including 5 lambs, the newest of which was only 3 days old.

The flock had been in the barn all winter and were scheduled to go out to pasture in a few days. They will remain here in the valley for a week or so, then spend the summer in a high Alpine pasture, along with a young man and a dog as their shepherd/protector: “There are wolves that come over from Italy (!) and eat the lambs”, we were told. 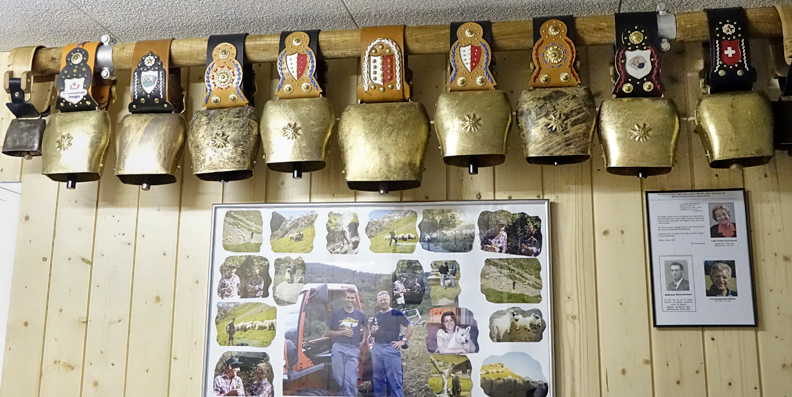 The farmer, showed us many bags of shorn fleece, large sheep bells, tiny lamb bells and some elaborately decorated bells for festivals. This was much more than I had ever hoped for; I felt quite euphoric.

Here is the farmer; what a kind and wonderful man, and such blue eyes! 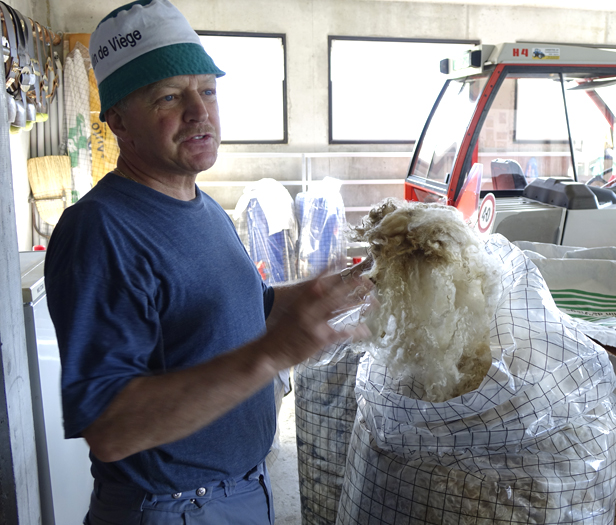 He offered us a drink, but we had already taken up a large chunk of his morning, so we let him get back to work. We thanked him profusely, and I have since sent him many photos of his ewes and lambs. 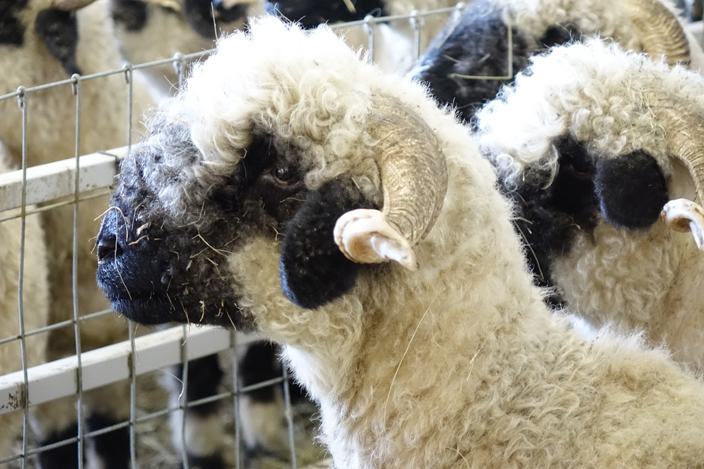 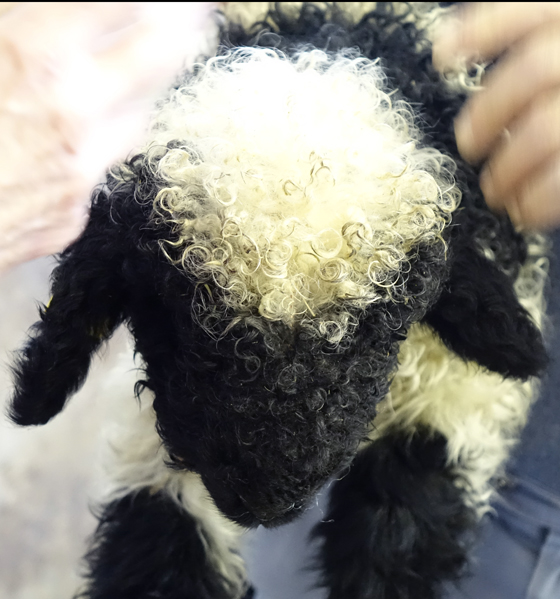 posted on Thursday, June 30, 2016 4:35:27 PM America/Chicago
Meg!! How did I miss this blog post! Such lovely memories of meeting you and Lloie in Biella and the days to follow! ... I have not given up my dream of bring you back to Italy!! you know how you always end your notes with "Knit on"... in Italy we are apt to say "Sferruzza che ti passa" - which basically means "whatever bad moment you are having, knit a few rows and soon it will only be a memory"

posted on Thursday, May 12, 2016 7:41:43 AM America/Chicago
Thank you for sharing your Swiss adventure in search of Valois sheep! I fell in love with their pictures and located someone who had some of their fleece to spin. I have to admit the resulting yarn would make incredibly hard-wearing socks as it had all the joy of spinning steel wool but with faces like that, who cares?

posted on Saturday, April 2, 2016 6:45:34 AM America/Chicago
Oh Meg,
What a wonderful adventure. Thank you for sharing it with us. The photography is outstanding. I just want to reach out and touch the sheep - my new favorite breed ! The village in the mountains is perfect. Have you considered leading a knitting group there ? Sign me up.
Thank you for the blog and videos. I just discovered them and will watch and read them over nod over. It's like having you in my home for a visit. Great idea.

posted on Tuesday, March 8, 2016 11:32:14 PM America/Chicago
Lovely reading.
What an excellent adventure for you and Llo!

posted on Thursday, February 11, 2016 9:49:03 AM America/Chicago
What a wonderful post! I feel like I was there, and as others mentioned as if I could hear you telling the tale. I am signed up for your Yarnover keynote, with fingers crossed for news of Camp!

posted on Wednesday, February 3, 2016 6:40:16 AM America/Chicago
Dear Meg,
I am so delighted to read your blog posts. I love reading and travelling vicariously through you. You have the amazing ability to make anything sound captivating. I would love to go to that wonderful little village and meet " 'ol blue eyes" and see his sheep. Thanks for taking the time to write.

posted on Tuesday, February 2, 2016 11:20:36 AM America/Chicago
What a fascinating blog, thank you! The fleece looks quite soft and fine, but i'm wondering if this breed is related at all to the Scottish Blackface?

Google writes that the Valais Blacknose Sheep is raised for both wool and meat. There is also a Facebook Fan page with lots of pictures. They are truly a gorgeous breed!

posted on Monday, February 1, 2016 8:54:39 PM America/Chicago
Enjoyed the blog..sent my friend a text that now she needs to travel there..I vicariously travel through her..Israel..Ireland and now she should do Switzerland! I have been to Knit Camp and she has not..and raised sheep! I could smell how yummy that wool was the man held up! I would love to get a pound! Thanks for sharing...

posted on Monday, February 1, 2016 6:50:28 PM America/Chicago
Wow, that is some blog post Meg! What beautiful photos! I'm so glad to see you have started a blog! I don't think I'll ever be able to make my way to Wisconsin or to one of your retreats so I really appreciate that you've extended your reach to the rest of us who can only wish........you should write a book one day, about these kinds of stories!

posted on Monday, February 1, 2016 6:57:28 AM America/Chicago
Thank you so much for sharing your journey to find the Black Face sheep. What a treat it would be to travel to Italy and attend your knitting retreat and to knit with that fleece. Thank you for sharing.
Set Ascending Direction