Near the end of December, in the mid 1970s when our kids were very young, a large box arrived at our house in upstate New York; it was from the children’s grandparents in Wisconsin. Chris and I hid it until Christmas.

It was the same year that Chris built an indoor playhouse for Cully and Liesl in the music room. It was two-stories high and reached to the ceiling: a small front door, a very small staircase to the second floor, and two windows (with working shutters) on both the first and second floors. Grownups could not fit through the door - and certainly not manage the stairs. Chris worked on it for several weeks and had all the pieces pre-fabbed for quick and easy assembly. I painted, and decorated it with the children’s names on the front door, and some rosemaling around the door and windows. When the kids were soundly asleep, we brought in all the pieces and put it together as quietly as possible (but needed a drill and hammer).

On Christmas morning the kids peeled downstairs to the living room, and presents were opened - one at a time. The major excitement were the parcels from my parents…a Sasha doll for each child: George for Cully, and Belinda for Liesl. There were additional small packages containing handknitted clothes for each doll.  (Both of my children have just reminded me that there were - specifically - TWELVE small parcels for each doll; one for each of the twelve days of Christmas. How could I have forgotten that clever detail, which continued the daily routine of opening doors on the advent calender.)

So engrossed were the children by their new doll-friends, that neither of them ventured into the music room.

When all presents were opened, we went into the kitchen for breakfast. 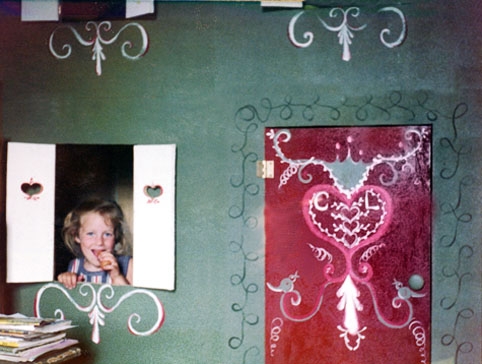 I’m not sure who first discovered the playhouse - but there was a sudden shriek of surprise and joy which brought the other 3 of us running into the music room. Well !

We had a slew of visitors that afternoon. They came to see our freshly-cut Christmas tree with real candles* (a tradition that continues to this day). The gang of children spent the entire afternoon in the playhouse. I can find only one photograph of that lovely house; why don’t I have dozens? Or at least one which shows the entire structure? And where is Cully? Maybe he is peering from one of the upper windows, and I missed him. As official family-photographer, I certainly had my share of  lapses.

Later that evening - when it was just us again - Liesl told us that she had heard a noise on Christmas Eve, and crept downstairs. She peered around the doorway to the music room and SAW SANTA putting the playhouse together. She was speechless. Santa looked at her and said softly, “Now go back to bed, little girl."

The Sasha dolls: These wonderful designs of Elizabeth’s that appear in SPP#26, fit the 16.5” Sasha dolls, and were copied from one of my mother’s knitting journals (one page shown below). Her notes were written only for herself, so they are exceedingly brief and somewhat cryptic. Even though I translated them to typeface, and augmented them when I felt it would be helpful, some of them remain as an interpretive challenge. 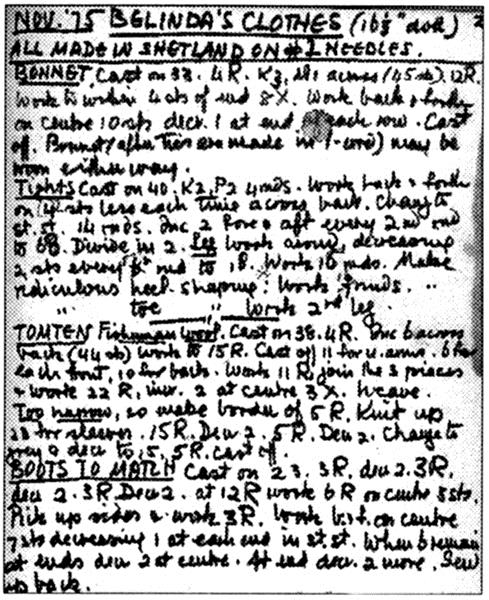 My mother had bought the dolls the previous summer, and kept them at her side during the many months that she knitted their extensive wardrobes. But, cleverly, she sent only 12 outfits to accompany each of them, and kept the rest to distribute on special occasions through the remainder of the year: birthdays, Valentine’s Day, full moons, blue moons, St Patrick’s and St David’s Days, Walpurgis Night (a Pogo-holiday that caught our attention), St Nicholas, Solstices and Equinoxes and - Elizabeth’s personal fave - Groundhog Day. 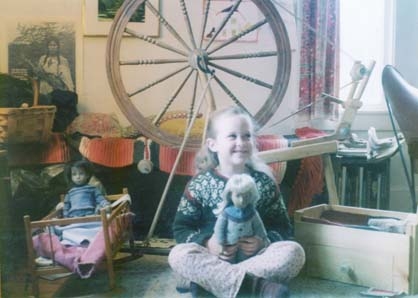 Once George and Belinda were shipped to the kids in New York, Elizabeth pined for them and to ease her lonliness, she bought another doll for herself; the lovely Martha now became the model for EZ’s future designs.

EZ chose the Sasha dolls in particular, because of their very human proportions. This enabled her to try out new construction ideas in miniture. Some of the garments (like the Tomten and high-top slippers) were already existing EZ designs which she cut down to Sasha-size, but many of the items (like bell-bottom pants!) were new ideas that she experimented with. And - although it is difficult to remember that far back with total accuracy - it pleases me to think that both the original Suspender Sweater and the Nalgar had their beginnings as sweaters for George and Belinda. I remember helping mum come up with a name for the Nalgar - and although we both thought it a bit corny to simply spell Raglan backwards, that indeed is the direction of the yoke shaping. 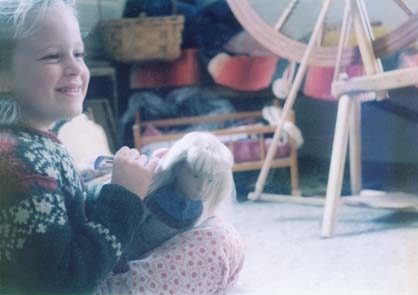 *P.S. “real candles”. I can remember people freaking out about this when I was a kid. During our years in Shorewood, WI, our parents established an annual open house afternoon. We served drinks and cookies, and would light the tree a number of times. To calm the most fanatical critics, my mother would hold a lighted match under one of the branches; it would sputter and spit, but never catch fire. Of course, the tree must be freshly cut a few days before Christmas Eve. 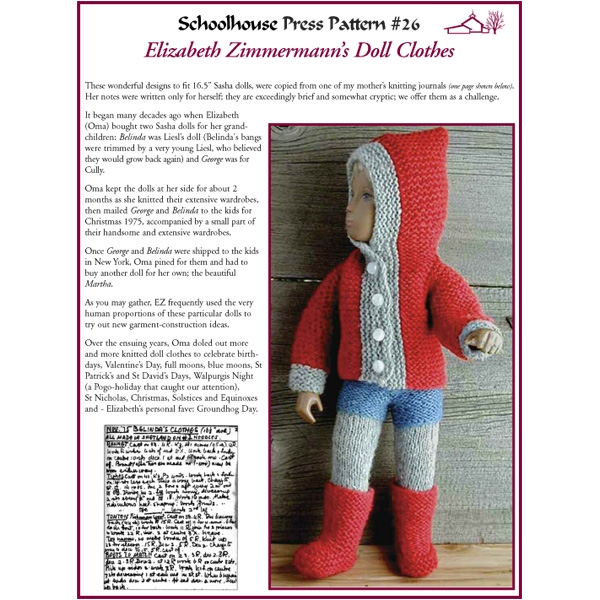 posted on Tuesday, January 9, 2018 1:01:39 AM America/Chicago
Beautiful recollections of your family history, Meg. I absolutely love, not only the way, but also WHAT both you, and your mother before you, write/wrote about! No fuss, down to earth, everyday life. Makes me feel like family. I will read her books over and over, and I am binging my way through your blog posts right now. ❤

I love the idea of trying designs out on a well proportioned doll! I have to ask who the spinner was? And what kind of wheel is that in the background?

posted on Friday, January 5, 2018 10:42:11 AM America/Chicago
I've only seen a tree with real candles once, and it was magical. I was invited to a Christmas gathering in Palo Alto, CA, probably in 1984, by another teacher whom I didn't know very well. Because my husband was working the evening shift at the hospital, I took my little daughter, a few months short of two, along. When the candles were lit, she said, "Oh!" and her eyes grew large. My fears that she might want to investigate the candles were groundless. I saw the magic through her eyes.

Also, I grew up on a farm in Ohio, and we always went out on Christmas Eve afternoon and chopped down one of the cedar trees that grew along the fences in the pasture.

Thank you for your lovely Christmas memory.

posted on Tuesday, January 2, 2018 5:29:44 PM America/Chicago
Thank you so much for sharing this wonderful, special story!

posted on Tuesday, December 26, 2017 9:17:03 AM America/Chicago
Thank you very much for sharing this beautiful family story. What a mind movie to have in your heart. Wishing you and all close to your heart an awesome holiday season.

posted on Thursday, December 21, 2017 1:15:45 PM America/Chicago
Thank you very much for sharing this beautiful memory and another glimpse of your wonderful family. Reading this sweet story certainly helps get me in a Christmas mood!

posted on Wednesday, December 20, 2017 9:34:32 AM America/Chicago
I just had a conversation last night, at an office Christmas party, about how few photos were taken in that dear, pre-digital age. Film and processing were expensive and one dared not "waste film" (it would never have crossed our minds to waste good film on a selfie!), and we didn't all have cameras in our back pockets! I like to think that having had to rely on our mental pictures, rather than a physical or digital image, we have given ourselves the gift of savoring many happy memories. Thank you for sharing yours.
Merry Christmas!

posted on Wednesday, December 20, 2017 8:46:41 AM America/Chicago
Great story. What a lovely memory. Would love to see a picture of a lighted tree

posted on Wednesday, December 20, 2017 8:44:09 AM America/Chicago
Thank you all for your lovely comments. Susan, your last sentence brought a tear to my eye..

posted on Wednesday, December 20, 2017 7:24:24 AM America/Chicago
What a lovely story. That playhouse must have been a dream!
And what magic it must have been to see a tree lit with real candles. I’ve known of that tradition but always envisioned dry trees up for weeks igniting like tinder. Yet my parents talked about cutting down the tree on Christmas Eve, and of course - fresh tree well observed and loved, no tinder! And the Sasha dolls....have heard about them too from my nearly 93 year old mother. Must go ask her about the details. Merry Christmas to all, and especially to Liesel and children like her who see behind the veil what the rest of us miss, and the adults who hold their visions in love and grace.